Just last weekend, I brought the gf for a nice romantic dinner - it was to celebrate our 5 years 10 months anniversary - yes, we've been together for so long already. I wanted to bring her to somewhere nice and at the same time, light stuffs - but I couldnt think of any good places around. But there was always one place that I wanted to try out for a romantic night... 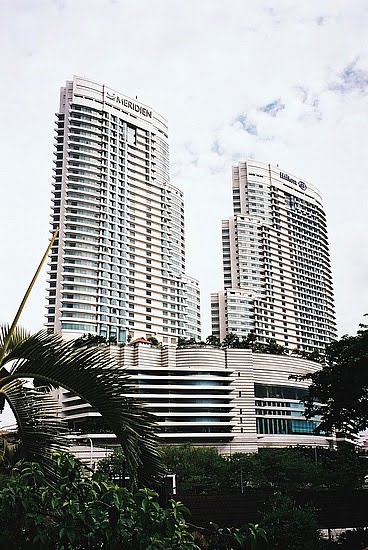 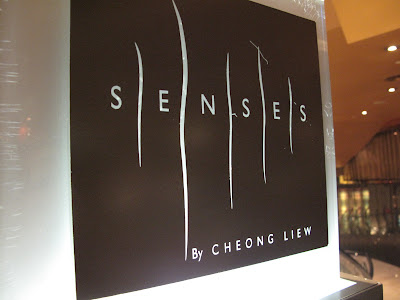 The restaurant that I chose was SENSES - the one thats opened by celebrity chef Cheong Liew. I used to drive along Zehn Bukit Pantai everyday and see his name and his picture on the billboard (he's the kitchen designer marr...) - but I had never met him in person. Or been to his restaurant. 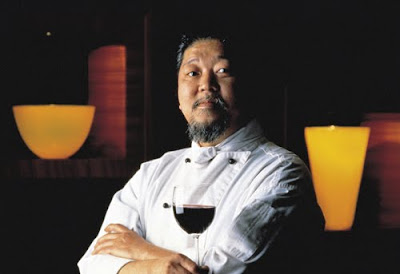 Chef Cheong Liew - the celebrity chef.
Forget Jamie Oliver, forget Gordon Ramsey. Chef Cheong Liew is the bomb!!! =)
Anyways, you may ask... why did I choose Senses, KL Hilton???
Senses is a very fanciful posh restaurant - and it is perhaps the only restaurant in Kuala Lumpur that serves posh modern Australian cuisine. Based on the settings and the atmosphere here, it is the perfect venue for business meet-ups, family gatherings, a time with friends or for the special occasions - such as an anniversary. 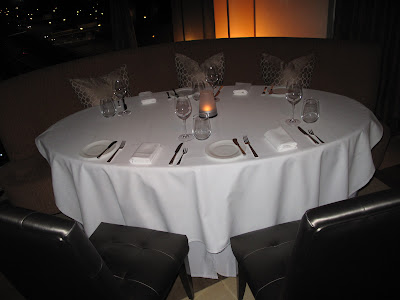 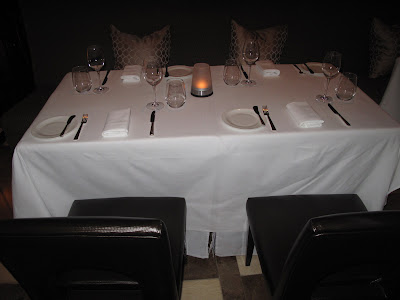 Or maybe for a small group of 4 friends or so... 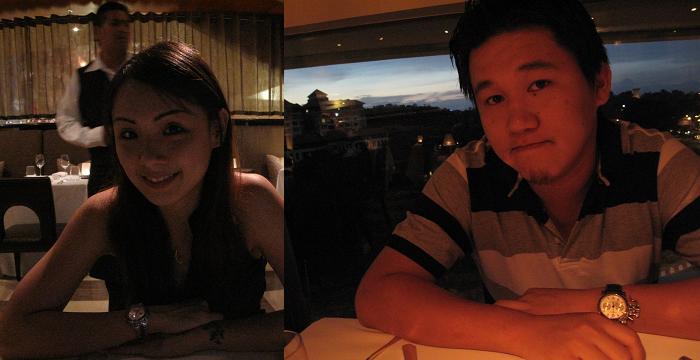 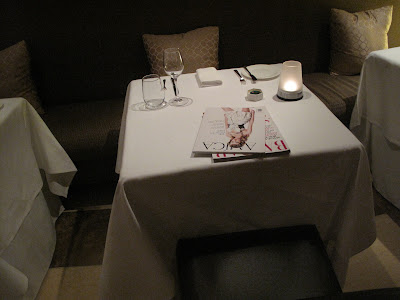 So - we took the table for two.
For the night's dinner, we didnt have the hassle or trouble of choosing from the menu. There was no a-la-carte selections - as Chef Cheong Liew had already prepared a special menu. It was called the 'River of Fish 2010' - featuring an array of South Australian seafood - ahhh... my favouriteee!!!!

The Coffin Bay Kumamoto oyster, tarama lavoch.
Freshly flown in from Coffin Bay, Eyre Peninsula - the famous oysters had a very distinguished taste of freshness. In fact, for a non-oyster eater like me - I enjoyed my oyster to the very last bit! Then there was also the caviar, served with some juicy cream on top of a warm rock - all that were served on a piece of ceramic tile - truly appetizing to start off the meal =P

See how happy I was eating the oyster...
You can ask my gf - usually I wont even take oysters as I hate the smell. But this one was good!!!!

The green lip abalone Heirloom tomato & bottarga.
We had some very thinly sliced abalone - served together with some very sweet tomatoes as well as some rare Mediterranean bottarga. Chef Cheong Liew came by and mentioned that this would go very well with a glass of 2008 Australian Pemberton's Haughton Wisdom Sauvignon Blanc. Wow... I'm dying to try it out with the wine.. 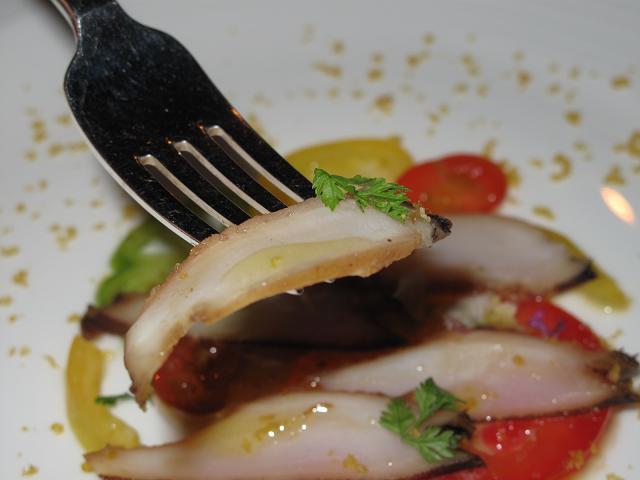 See how deliciously juicy the abalone slices are.... oooo yummmmyyzzz!!! =) 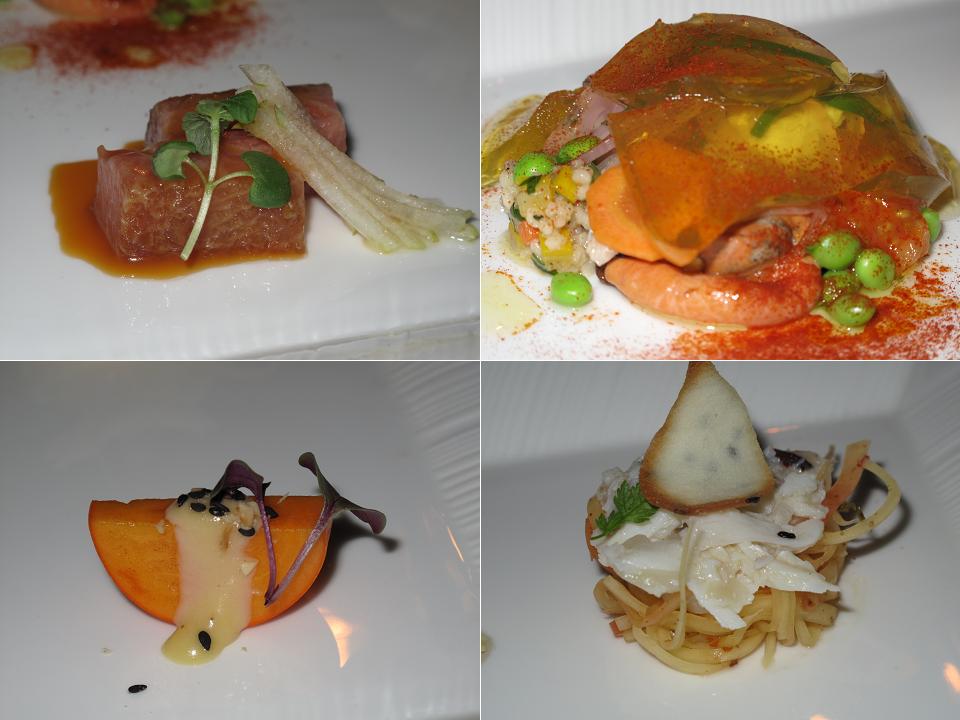 This is a 4 part thriller - the full name is as follows.
The South Australian blue swimmer crab with papaya salad & South Ocean snapper jelly, Port Lincoln blue fin tuna otoro and soy-cured egg yolk dressing.
I dont think I can say it all in one breath also. To be eaten in sequence (clockwise - from top left) - first, the blue fin tuna, then the snapper jelly, then slowly enjoy the blue swimmer crab meat and end it all with the persimmon. 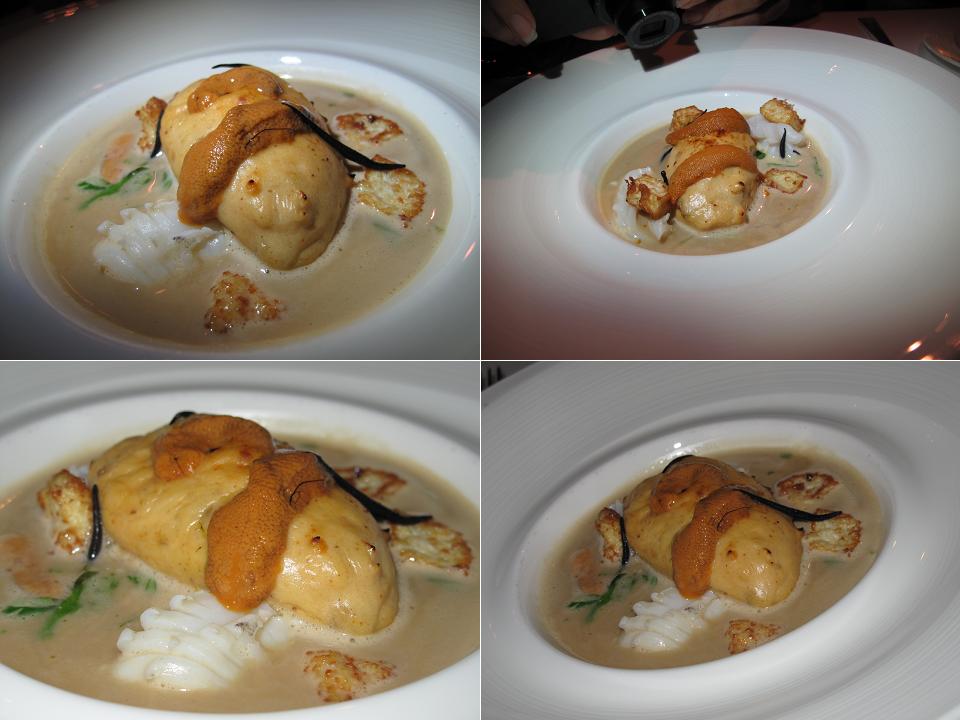 ..and this is the Eyre Peninsula sea urchin mousse with Cheong's laksa broth.
Something out of the ordinary - Chef Cheong made this special delicacy a mixture of both western and Asian - combining the sea urchin bits together with some special laksa broth. Truly enjoyable and really good. I love this soup/dish very much!

The white bamboo mushroom - stuffed with Moreton Bay bugs, steamed Kangaroo Island garfish with clam sauce.
At first - we were worried that Chef Cheong was going to serve us bugs. But it turns out that there werent exactly bugs - even if there was, it was already blended into a mousse. The garfish - is actually a type of needlefish - and this is one special delicacy that everyone should try out. 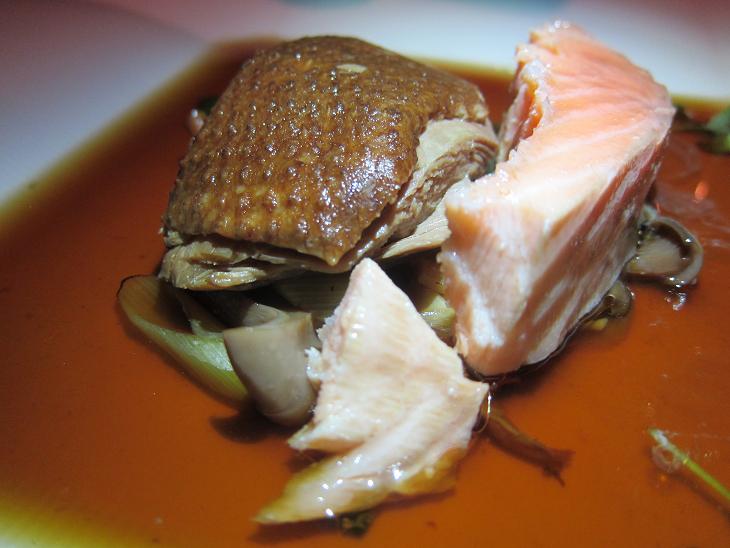 This is the salt baked ocean trout with braised duck, leeks & wild mushroom and abalone soba.
Once again - another mix of Western + Asian - Chef Cheong comes up with another special fish delicacy - this time, using the ocean trout. Mixing this trout with duck, leek as well as some awesome abalone soba - we have ourselves a feast to remember!

To end the night with dessert, we had the Balthazar, honey & cinnamon ice cream and the berry compote.
By this time - I was hoping that I had a lot more stomach space to spare. But then - even the light dinner was filling me up so much. I had such a great time - and I never thought that the dessert would be half as good as the dinner.
I was so wrong. The dessert - just put me in another world altogether. Wow.
All in - the entire meal cost RM 398++ per person. That's over RM 800 for the two of us. If I had gone for the wine pairing, the entire 6 course meal for the both of us would have costed beyond RM 1,200. I would have loved to have the wine pairing. Hehe.

hahaha
really yummy shld get yr bf to bring u there!

garfield - hehe we love our food =)