Home » breaking news » Greece: Is this the end game?

Greece: Is this the end game? 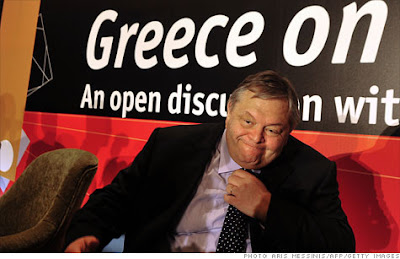 Greece is quickly running out of the cash it needs to keep the lights on as the latest lifeline from the rest of Europe remains just out of reach. Evangelos Venizelos, the Greek finance minister, will discuss his country's plight with officials from the European Commission, the International Monetary Fund and the European Central Bank during a conference call Monday.
The call comes on the same day that representatives from that so-called troika were originally scheduled to return to Athens to review Greece's progress on reforms needed to obtain its latest installment of emergency funding. After abruptly leaving the country earlier this month, officials from the troika delayed a decision on whether to pay out the next portion of Greece's loan until October. The fraught negotiations have revived fears that Greece could default on its debts in a disorganized way, something that investors and economists fear could ripple throughout the global financial system.
Greece is expected to run out of the cash it needs to fund all of its operations in about a month without more bailout money. The country is due to receive an estimated €8 billion from a €110 billion rescue package the troika set up last year as Greece came to the brink of default.
Source
Posted by Eric